President Tsai Ing-wen delivered her 2020 New Year's Address this morning (January 1) in the Presidential Office reception hall. She stated that in the new year, we are going to unite the Taiwanese people, and continue pressing forward to ensure more people are cared for, keep improving our economy, and make our democracy, freedom, and sovereignty stronger and more sustainable. She also reiterated the "four musts" and "four understandings," emphasizing that the passage of the anti-infiltration act will not affect freedom, infringe on human rights, or affect normal economic exchanges. It will only more strongly protect Taiwan's democracy and freedom, and will not affect any regular cross-strait exchanges or interactions. 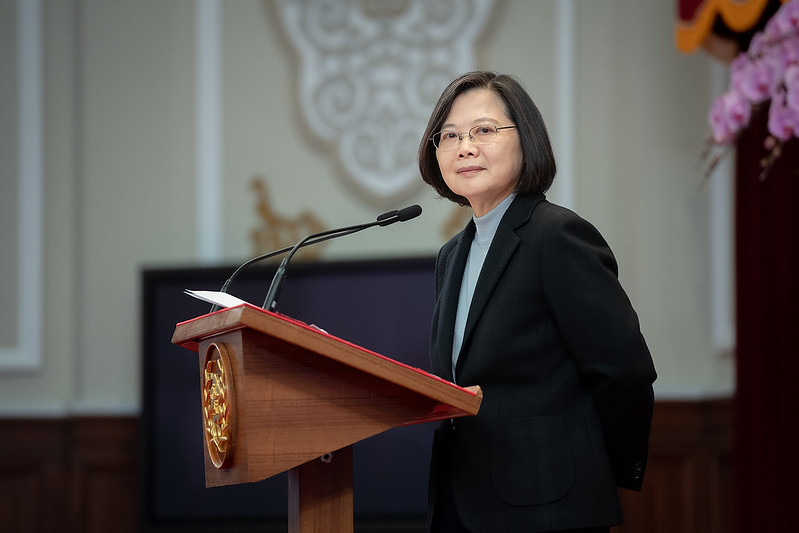 The following is a translation of President Tsai's remarks:

My fellow citizens and friends from the media: Good morning. Happy New Year!

Today is the first day of the 109th year of the Republic of China. For the New Year 2020, I would like to begin by wishing all of my fellow citizens the best of health, and a happy New Year.

On this New Year's Day, many new policies will take effect.

This year, we have once again raised the minimum wage. Especially for those of you who work part-time, this will be the fourth consecutive year your hourly wage has increased, and I'm sure you will all feel the difference.

For families with children two to three years old, if the children stay with a childcare provider and have not yet begun attending preschool, then beginning this year, extended childcare subsidies can save a lot of money in childcare costs.

If your family has someone who needs long-term care, when you file taxes in May, don't forget that the long-term care deduction formally takes effect this year.

For farmers, we have begun processing applications for this year's agricultural machinery subsidies. We are also deliberating setting up a retirement system for farmers.

Each year, the government should be able to care for more people. This is what I expect from myself, and I hope all my fellow citizens can be well cared for.

I would also like to share some good news. The improved South-Link Highway just opened to traffic, and the improved Suhua Highway and West Coast Expressway are preparing to open. For so many years, everyone has been hoping for a safe and convenient way to get home, and that wish is finally a reality.

I would like to thank Premier Su Tseng-chang (蘇貞昌) for his leadership of the administrative team over the past year, which has brought about tangible changes in people's lives.

Over the past year or two, Taiwan has faced massive changes in the international economy, especially challenges resulting from the US-China trade war. But through the concerted efforts of the Taiwanese people, we have endured.

Last year, Taiwan's economy performed well compared to neighboring countries. Our economic growth rate returned to the top spot among the Four Asian Tigers, and seeing the Taiwan stock exchange index above the 10,000-point mark is now the norm.

More important is that last year, we saw the largest wave of investment by returning Taiwan businesses in decades. Overseas capital is looking to return as well. Foreign enterprises are bullish on Taiwan's future economic prospects and have increased their investments. These moves prove that, after years of effort, we have successfully reversed several decades of industry relocation and capital flight.

We can see that these are all signs that our economy is moving in a positive direction, bringing opportunities to transform an economy that has long lacked forward momentum.

Over the next four years, we are committed to creating another economic miracle and establishing a new economic model where our people can enjoy universal benefits that make a real difference in their lives.

We will realize trillions of dollars in investments, turning Taiwan into a high-end manufacturing center, high-tech R&D center, green energy development center, regional capital and wealth management center, and a hub for high-tech and industrial personnel training. We will devote our efforts to economic transformation and industrial innovation to remold Taiwan amidst rapid change in the global economy.

The government will also provide ample assistance and various safeguards to more vulnerable traditional industries, agricultural sectors, and small and medium sized enterprises. These measures will minimize the impact of the overall economic transformation process, so that they can smoothly transform and upgrade.

For industries affected by changes in China's policies towards Taiwan, the government will definitely provide support and assistance in developing new markets and promoting transformation and upgrading so they are no longer dependent on China, or subject to uncertain political factors.

Of course, Taiwan is not just important economically. Our democracy and freedom are also important factors.

Over the past few years, China's diplomatic offensives, military coercion, interference, and infiltration have continued unabated. China's objective is clear: To force Taiwan to compromise our sovereignty. Moreover, at the beginning of last year, China's President Xi Jin-ping (習近平) proposed the "one country, two systems" model for Taiwan.

I want to thank the Taiwanese people for giving our administration your strongest support. By refusing to submit, we have clearly told the world that Taiwan will never accept "one country, two systems."

In the face of China's pressure, I advocated the "four musts" last year. I called on China:

China must face the reality of the Republic of China's existence.

China must respect the commitment of the 23 million people of Taiwan to freedom and democracy.

China must handle cross-strait differences peacefully, on a basis of equality.

It must be governments or government-authorized agencies that engage in negotiations.

A year later, my convictions are even stronger. A few days ago, I proposed "four understandings" in even greater detail, in the hopes that all my fellow citizens can remain united and face external threats together.

First, China is the one undermining the status quo in the Taiwan Strait, not Taiwan. We must stand together in the face of China's suppression.

Second, China is using the "1992 consensus" to undermine the Republic of China. We must be even more determined in defense of our sovereignty.

Third, sovereignty cannot be exchanged for short-term economic benefits. We must have a bottom line to ensure that our sovereignty is not infringed upon.

Fourth, we must be aware that China is infiltrating all facets of Taiwanese society to sow division. We must establish democratic defense mechanisms to prevent infiltration.

If all Taiwanese people and political parties can form a consensus upon these four understandings, this unity will become an immense force that will allow the Republic of China (Taiwan) to stand tall in the international community.

Yesterday, the Legislative Yuan passed the anti-infiltration act. Everything included in that act is already regulated or prohibited in domestic law. Only actions that are prohibited by law, and carried out under instruction from China, commissioned by China, or funded by China, will constitute infiltration. Moreover, neither government agencies nor any single person can declare an action illegal. It must be ruled on by the courts.

I want to emphasize once again that we are opposed to infiltration, not exchanges. This legislation will not affect any regular cross-strait exchanges or interactions.

So Taiwanese businesspeople, students, teachers, and executives in China can continue on with their daily lives unaffected by this legislation.

Those who worship Mazu or other gods, or take part in any other regular religious exchange activities, will not be affected. Cross-strait tourism activities and normal business for travel agents will absolutely not be affected.

Here, I want to thank my fellow citizens for supporting this legislation. I also want to specially thank legislators from all parties for rationally discussing this bill in the Legislative Yuan.

"Working Together to Lead Taiwan Forward" is the central theme of this year's New Year's Day celebrations. We are going to unite the Taiwanese people, and continue pressing forward to ensure more people are cared for, keep improving our economy, and make our democracy, freedom, and sovereignty stronger and more sustainable.

In 2020, Taiwan will once again be the focus of the world's attention. I hope that all of my fellow citizens will show the world our courage and solidarity, and ensure that the light of democracy and freedom once again shines on Taiwan and the entire world. Thank you.